Collaboration Is The Way Forward For Higher Education

Much like higher education’s construction race, school rankings which compare schools across a variety of metrics—which ultimately affect an institution’s ability to recruit top-notch students and star faculty—are leading institutions to make “warped” decisions. For example, despite the glut of doctoral graduates in the United States, increasing numbers of colleges and universities are adding more doctoral programs in the name of rankings.

He argues that in the face of declining public funding and increasing scrutiny on the higher education system, colleges and universities should be finding ways to cooperate “in the same way that companies merge and become more efficient”.

He argues that schools should focus on particular strength-subject niches rather than trying to provide everything to everyone. In situations where this is not plausible, he suggests that institutions develop partnerships that would allow them to share faculty, allowing a greater mobility of knowledge. This idea is exemplified by the online learning partnership announced between Harvard and the Massachusetts Institute of Technology. 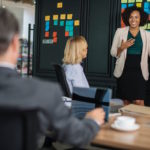 From the Backroom to the Top of Mind: The Evolving Role of the Strategic CIO

Surviving in a Student Consumerist World