Continuing higher education professionals, in general, and for-profit higher education executives, in particular, are often criticized for hucksterism and gross promotion of degree programs and other collegiate offerings. But the aggressive marketing of higher education is almost as old as American universities themselves. For example, more than a hundred years ago, one now-prestigious university issued press releases that it was restricting its entering freshman class to no more than 500 students. In an effort to create the illusion of exclusivity, that university’s president clearly overstated its case. The institution had never had a class of that size, let alone that number of applicants for admission.

Marketing decisions have weighed heavily on both admissions and academic policies. In the first decades of the 20th century, both Harvard University and Columbia University feared the erosion of their market share of students coming from the affluent families of Boston and New York. Those scions of wealth were going to Princeton University and Yale University. As a result, both of these urban Ivies deemphasized meritocratic criteria in favor of those based on wealth, class, and religion.  Unfortunately, those criteria carried over into grading, course difficulty and academic standards as well.

For those in contemporary academic life who long for the days of the promotion of higher learning for learning’s sake, those days never existed at all. For more than 60 years, the American Council on Higher Education, in its national campaigns promoting college attendance, has always focused its message on the utility of a higher degree for increased earning power and economic and social mobility for college graduates. The content of higher education, the curriculum itself, has rarely been a focus for most colleges and universities in the contemporary era. Indeed, most institutions invest far more heavily in the context of education: the dorms, the cuisine, the student center, the athletic facilities for dating and mating and the campus “look” (the buildings and grounds). Promotional literature — the view books, direct mail brochures and websites — all emphasize the “undergraduate experience,” of which the content is but one part, one small part. The promotion of higher education is primarily aimed at making the choice of institution an emotional rather than a rational decision.

The truth is the promotion of continuing, professional, vocational and online education — by public, private or for-profit institution alike — is, in essence, far more honest. Instead of exclusivity, convenience is emphasized. Instead of “experience,” the content of programs is laid out for the would-be applicant. Instead of the social milieu of collegiate life, the immediate application of what is learned in the classroom to one’s workday life is stressed. In short, this honest hawking of graduate, professional and vocational programs at the very least encourages the consumer to seriously weigh the outcomes of enrolling and completing these programs against the cost of time and money invested in pursuing further educational goals.

There is, however, much that is dishonest in higher education marketing, regardless of type of program or institution. Overselling the utility of a professional program and overstating the employment opportunities or mobility that presumably comes with a degree or certificate are two examples that come to mind. Also, the recruitment of unqualified students, loading such enrollees with enormous student debt while knowing the chances of student success are virtually nil, is unconscionable.

The advent of for-profit higher education and online courses and programs has not substantially changed the marketing of higher education; it has just brought it to a new level. With no other significant costs, for-profit institutions can spend mightily on marketing. The struggle for market share has been heightened and is intense. Traditional professional and lifelong learning programs have responded to these new, well-bankrolled competitors by emphasizing their local reputation, their accessibility and improved customer/student service.

Continuing education and professional programs for adults, once a captive market of local institutions, is now a national marketplace in which the general public has endless choices. Competition has no doubt improved quality for many programs and declined for those that fail to reinvest in program currency and development in favor of spending on marketing alone. Program quality is somewhat ethereal and is ultimately in the mind of the consumer. The consumer will determine whether quality has primacy or is just one of several factors in enrolling by his/her checkbook and credit card.

Everyone in higher education responsible for filling seats, including presidents, has long known the content of higher education is a commodity. Further, to sustain their institutions, marketing is essential. Regardless of type of institution — public or private, for-profit or not-for-profit, undergraduate or professional, academic or vocational, traditional or non-traditional, bricks-and-mortar or virtual — all must play in the academic marketplace and do so with an aggressiveness and larger purse than ever before. 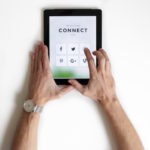 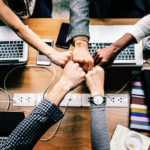 Colleen Howes | Associate Dean for Communications and Advancement in the School of Education, University of Wisconsin-Madison 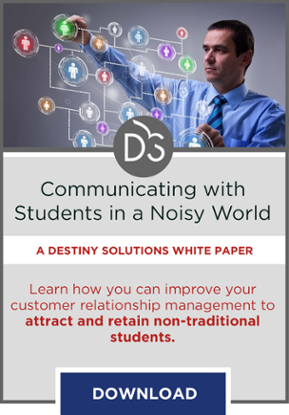 It’s true that the landscape of higher education marketing has changed with the entry of for-profit providers. More and more, I hear of institutions hiring external marketing consultants to help them develop strategies to reach not even new, but their traditional, target markets. No institution is “safe” anymore.

An interesting read on the way marketing for higher education institutions has changed over the years. I would, however, disagree with Grossman’s conclusion that marketing today encourages the prospective student to “seriously weigh the outcomes” of enrolling. Instead, I would apply his description of undergraduate education marketing, which aims to have students make “emotional rather than rational” decisions, to today’s continuing education marketing as well.

It’s true that nowadays institutions are more likely to promote their programs’ applicability to the job market than, say, their new cafeteria. But the former claim is as much an attempt to create an “experience” as the latter; prospective students are being sold the promise of job advancement or re-entry into the workforce, rather than being told what their actual job prospects will be after graduation. In other words, the underlying objectives of marketing haven’t changed.