Higher Education Enrollment Down for the First Time in 15 Years

EvoLLLution NewsWire
For the first time since 1996, higher education enrollment dropped in fall 2011, according to a report of preliminary data released last Tuesday by the US Department of Education.

The report, which is based on data collected from over 7,000 colleges and universities that receive federal student aid, showed that enrollment dropped by a little under a percent from last year, the first time enrollment has dropped compared to the previous year in 15 years.

The report does not provide any theories on the reasons behind that drop, though for-profit institutions have reported that their falling enrollments could be explained by a weak economic and criticism of the sector.

On the public side, institutions could point toward reduced capacities that have been caused by vastly reduced state funding.

The full report on higher education in 2011 will be released by the Department of Education in December. 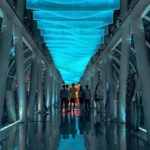 Technology Dissonance: The Digital Transformation in the Face of Budget Cuts