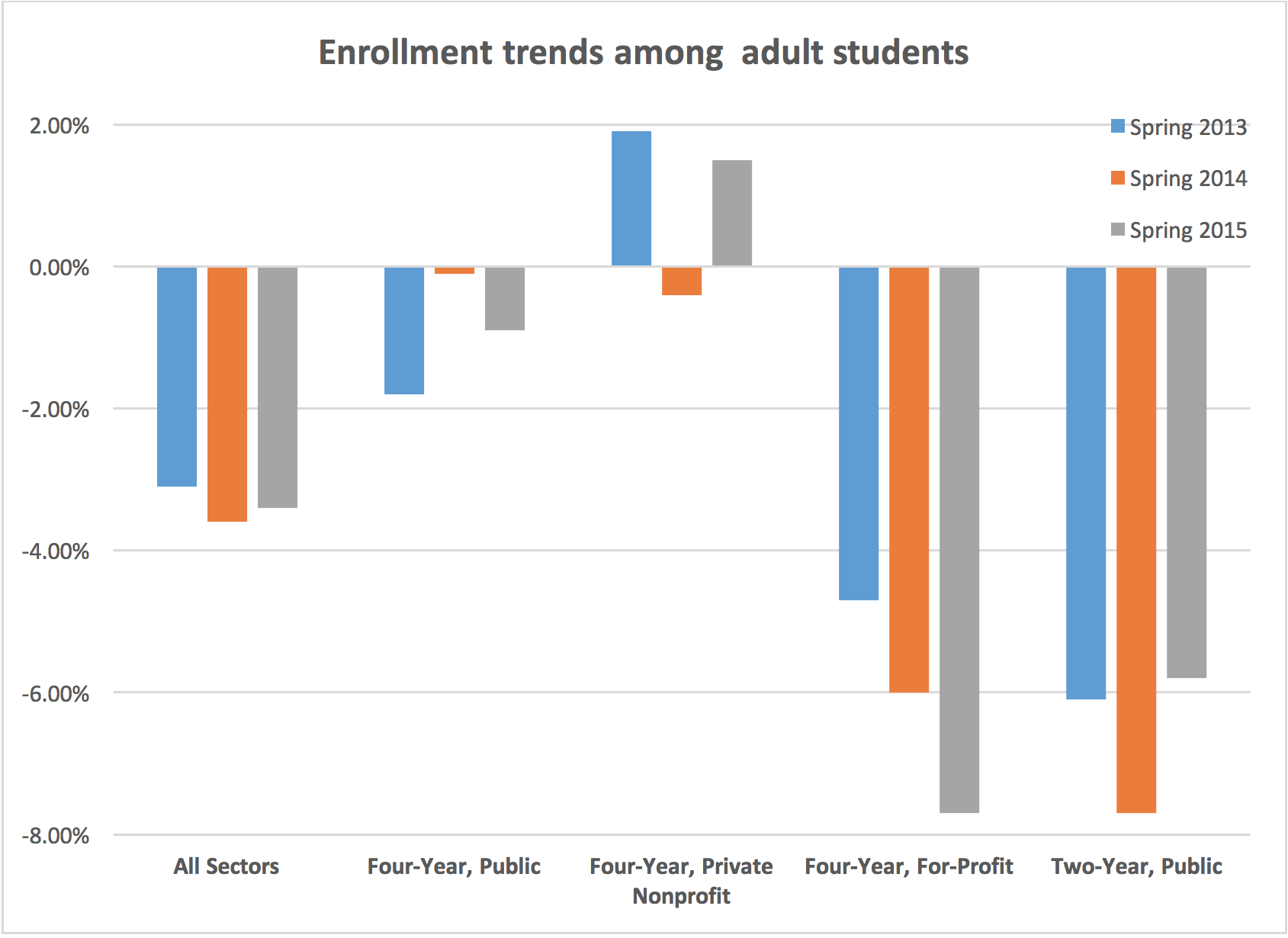 The decline of the for-profits is widely understood, given all of their problems with actions by the Department of Education and other governmental and regulatory bodies. Perhaps the most damning of the conclusions about the for-profit sector is this, from Cellini and Turner writing for the National Bureau of Economic Research (NBER): “On average associate’s and bachelor’s degree students experience a decline in earnings after attendance, relative to their own earnings in years prior to attendance.”

This is largely due to the high proportion of students in the for-profit sector who attend but do not complete the degree. This comes from Cellini and Turner’s NBER report, which is a population analysis that looks directly at IRS data to determine the outcomes from college education. The critique that students attend and mount up debt at for-profit colleges but do not reap the reward of a postsecondary education are supported by this study.

The Obama administration has sought to close the loophole in the 90-10 rule that allows for-profits to use veteran’s benefits. For-profits have used the amount of money coming in from veterans to count toward meeting the 10 percent of revenues required to be coming in from outside of Title IV to meet federal guidelines. This effort will close a widely used loophole and directly affect Ashford, Kaplan, and the University of Phoenix. Things have gotten so bad that the sale of the University of Phoenix on May 9, 2016 is just one example of this trend. The University of Phoenix was removed from military systems for several months in 2015. DeVry University was recently sued by the Federal Trade Commission for deception in its marketing. The closing of Corinthian Colleges has certainly put a damper in the enrollments of the for-profits. There is trouble in the for-profit sector, that’s for sure.

The decline in community colleges may be attributed to the improving economy as more people are working instead of going to school. In a recent Inside Higher Education article Jason Dewitt, the research manager of the National Student Clearinghouse, was quoted as saying, “We judge the improving job market to be the biggest factor, with the unemployment rate dropping to 5 percent this fall.” This is troubling because the community colleges have historically been the place where low-income individuals go to get a college education. We won’t be able to meet our college completion goals if the number of adult students attending community college continue to go down.

Could the growth of online options be driving the change? This trend is reflected at my institution, Loyola University Chicago, with enrollment growth of 47 percent in Fall 2015 and 29 percent in Spring 2016.  We’re experiencing a shift toward the blended and online environment from the face-to-face model. Could the development of blended and online programs be driving our growth?

Whatever the reason, this is a period of growth for adult students and not-for-profits.

A Strategic Roadmap for The Next Decade