Above the Noise: The Higher Education Highway (Part 3)

This is the final installment in a three-part series by Kenneth Hartman exploring what it takes for an institution to reinvent itself for long-term stability in today’s postsecondary marketplace. In the last installment, Hartman discussed the importance of aligning programming to market need and demand. In this second installment, he will explore the third P in the 3Ps that make up “The Way”: Process.

The process at any college, but especially at institutions at MM3-MM5, must be redefined, reexamined, and reformed from a student’s perspective. The ideal (and most important!) question to ask is “What is it like to be a student at my institution?”

The answer may take you in many directions (student services, facilities, etc.) and should provide a “check list” of items that may need to be addressed. It often reveals a legacy and structure that gives protection to the status quo.

Case in point: At the University of Colorado, President Bruce Benson recognized the future of UC depended on its ability to increase revenue while simultaneously reducing costs. Under Benson’s stand-alone leadership, UC:

The use of data analytics to identify and communicate weaknesses in the process and external challenges is essential to mobilizing the campus community towards needed change. Dozens of software vendors have the tools needed to get the job done.

For some institutions, even changing all three of the Ps will not prevent further acceleration down the Higher Ed Highway. These struggling institutions (public and private)—as they are currently positioned in the marketplace—may not be able to maintain financial stability in the long-term. Bold options will soon be their only alternative.

Trustees, who have a fiduciary responsibility, must consider merger and acquisition opportunities (both domestic and international), joint ventures with private equity firms, and the sale of certain assets to raise much needed capital and to avoid the eventual closure of their institution. Moody’s Investor Services reported in September 2015 that the number of four-year colleges closures will triple by 2017, concentrated mostly among small institutions.

Other mergers in the works include: University of Maine seeking to transition from seven public universities to one university with seven campuses, The Berklee College of Music with the Boston Conservatory, Salem Sate University (MA) with nearby Montserrat College of Art, as well the multiple mergers being conducted by TCS Education Systems. No doubt, there will be many more acquisitions/mergers to come.

Organization behaviorists often contend that no meaningful change can occur in an organization until the “pain” is great enough within that organization that members will demand action from their leaders. Higher education, in particular, fits that phenomenon, with faculty and staff often exhibiting what Arien Mack and Irvin Rock called “inattentional or perceptional blindness.”

For those institutions scoring MM3, MM4 or MM5, the hour is getting late. There are simply no more easy levers to pull.

If you think it is tough now, just wait two years.

You can reach Ken Hartman by email at kenhartman@kenhartman.com. 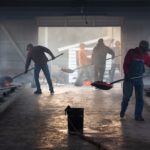 Personalization and Context Must Be Central to Any Effective College Rating

Leading in a Fast-Moving World: Four Characteristics You Need at the Edge of Change in Higher Education

11 Lessons Higher Ed Can Learn from the Private Sector