Prior to this, Vanorny was the Dean of Online for Carrington College California.

Vanorny has also served as the Manager of Educational Technology for DeVry, Inc. and as Instructional Designer for DeVry University. Prior to that, he also worked as Project Manager for CUIP (Chicago Public Schools | University of Chicago Internet Project).

Education, Honors and Achievements
Vanorny earned a BA at Winona State University in 1997. In 2000, he completed his Masters at the University of Chicago.

Personal Details and Community Involvement
When Vanorny is not designing courses, he's hanging out with his wife of 20 years and his two adorable 7-year olds, Winona and Dashiell. For those of you following along at home, that would make them twins. He often refer to himself as an indie rock fan, a film nerd, and a Minnesota sports devotee, but not necessarily in that order. 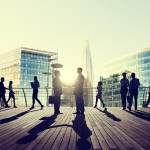