Current Position and Past Experience
David Sam is the President of Elgin Community College. He began his tenure in 2007, serving as the College’s eighth president.

Dr. Sam’s previous appointment was as president of North Harris College in Houston, Texas, where he was responsible for one of the five colleges and two satellite centers in the Lone Star College System, formerly known as North Harris Montgomery Community College District. Prior to his presidency in Houston, he was dean of the community and technical college as well as a professor of social science and business management at the University of Akron, Ohio. He previously served as vice president for faculty and instruction at Harrisburg Area Community College in Pennsylvania, as well as both acting vice president for academic affairs and dean of natural and social sciences at Mott Community College in Michigan. Additionally, Dr. Sam has held professional and teaching positions at College of DuPage and Harold Washington College, both in Illinois.

Education, Honors and Achievements
Dr. Sam is a cum laude graduate of Illinois State University with bachelor of arts degrees in economics, political science and history. He holds an M.A. in law and diplomacy and a Ph.D. in international economic and political relations from the Fletcher School of Law and Diplomacy at Tufts University. Additionally, he holds an M.B.A. in finance and marketing from the Kellogg School of Management at Northwestern University and a J.D. degree from the University of Akron Law School, and an L.L.M., Energy Law and Policy, Center for Energy, Petroleum and Mineral Law and Policy at University of Dundee, United Kingdom.

Personal Details and Community Involvement
Dr. Sam is currently a member of the board of directors of the Elgin Area Chamber of Commerce, the Greater Elgin Area YMCA and United Way of Elgin, as well as a member of Rotary Club of Elgin. He is also a member of the District of Columbia Bar, American Bar Association. Dr. Sam and his wife, Julie, have two children. 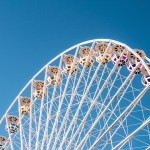