Current Position and Past Experience
Since 2008, Chris Christensen has been the Technology Director for Addison County Schools, where he is charge of the school district’s technology as a whole.

Prior to this, Chris was a field representative with Data Integrated Scientific Systems. He spent two years in this position travelling internationally to support client hardware and software. This position came on the tail of his time at Sominet, where Christensen served as the Chief Technology Officer for two years.

Education, Honors and Achievements
Christensen attended Indiana Wesleyan University from 1992-1996. He also completed classes at Macomb Community College from 1997-1999 and took History and English courses at Wayne State University between 1999 and 2002.

Connect
You can find Christensen on the web via the Geek Department Blog or on Twitter @christensen143. 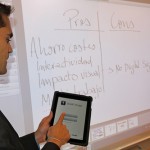 Engagement: Deciding What Technology Is Worthwhile In The 21st Century Classroom