Current Position and Past Experience
Since 2006, Amy Hyams has been the Commissioner of the International Association of Continuing Education and Training. She is also the Vice President of Educational Services with World Instructor Training Schools. 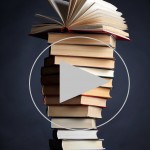 The Importance of Stackable Certificates